It still surprises me how few people in modern HEMA know how far we’ve come in the last 15 years. From a small group of scattered researchers across the globe, to a vibrant growing community today, the change has been phenomenal. However, this growth hides the fact that we are a very minor niche activity in the big scheme of things, with many groups consisting of only a few people, often without the benefit of an experienced instructor. Even amongst the instructors, there are actually only a few of us who can boast really long CVs, and most instructors are relatively new at the game. Thus, there has always been a need for information about our activity to be transmitted, and therefore I’d like to present a review of published longsword interpretations.

However, since not that many people know too much about the history of the HEMA community, I’ve decided to present the review chronological. This may or may not be useful for people, but I hope it shows where the published work fits in amongst other developments in the community. This set of reviews must also, unfortunately, be predominantly a review of HEMA in the English-speaking world, as I’m not familiar with the history of groups in areas such as France and Germany.That said, I think many of us started with the same sources, encouraging native speakers to translate the original texts into their own languages.

I’ve also decided to concentrate on “interpretations”, not translations. Though many of us now work directly from the manuals and manuscripts, our earliest ideas were formed either through watching another person (if we were fortunate) or through reading an interpretation. Even today, an interpretation is more readily accessible to a beginner than going directly to the source, no matter how wonderful the source! Some of you may argue that my choice of books to review is a bit limiting, but I’ve selected from my own library, and most of the books selected are still in print. 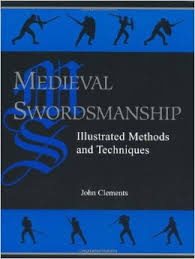 If, like me, you were searching the internet around the year 2000 for sources on how to swing a sword, Amazon had one suggestion: “Medieval Swordsmanship- Illustrated Methods and Techniques”, written by John Clements, founder and director of HACA (now ARMA). This book is a large A4 paperback still available through Paladin Press, packed full of little line drawings of men swinging swords. Though John Clements was already a controversial figure in US sword circles, for most people in and outside the US, this book was our first introduction to REAL swordfighting. The book is packed full of information- it talks about surviving fighting manuals (along with pictures!), it talks about the development of swords and shields, and it has lots of images showing people swinging swords. Basically, on the surface it has everything a beginner would want! At the time, this book showed me that swordfighting wasn’t the ponderous activity seen on film and TV, but a dynamic, skillful game, underpinned by actual historical research. In many respects, this book was priceless in my development as a HEMA practitioner.

There are, however, a number of problems with the book. We can gripe about the lack of references, the diatribes against various groups and practices, and the techniques shown, but the fundamental problem I have with prescribing the book is that it doesn’t lay out any systematic approach to learning the material. Though footwork and sword mechanics are covered, the book is more aimed at showing what can be done than teaching you how to do it. I remember reading the book avidly, but at the end, I still had very little clue how to go about learning to swing a sword.

Besides this glaring fault, much of the information in the book looks very dated now, and the interpretations shown are problematic. That said, I’d still tell a beginner to pick up a copy if a cheap one came up, simply because there is a lot of information in one place. However, I’d add a fair dose of warning to my recommendation- I don’t agree with many of Clements’ views such as edge on flat, and much other stuff is simply outdated. 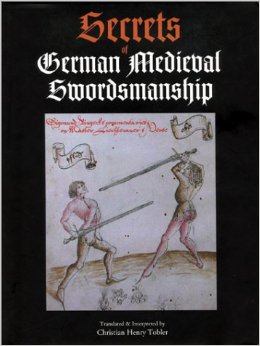 Though translations of historical sources were available in the 90s (for example, Mark Rector’s Talhoffer book, still a buzzword for HEMA amongst some reenactors), Christian Tobler’s “Secrets” was the first real translation and interpretation of a text-only German source. For me and most people around the world, this was our gateway to the Lichtenauer corpus, and our first sight of German longsword. Published originally through Chivalry Bookshelf, copies are still available through Freelance Academy Press, and a second edition is promised (sounds more like a complete revamp than a 2nd edition, so much of what I say here won’t apply to the new book).

Anyhow, the book is a large hardbound, glossy print book, with a colourful dust jacket. It’s packed with black and white photographs, and contains a complete transcription and translation of Ringeck’s 15th century treatise on the longsword, as well as the additional sections on sword and buckler, wrestling and armoured combat. Not only is every play illustrated, notes are provided on the interpretation of the play (this is where I first heard of Meyer, who Tobler used to help some interpretations).

The book is, even 14 years down the line, still a must for an aficionado of German Longsword. Though this is primarily an illustrated translation rather than a “how to” guide for a beginner, the sequence of plays and their interpretation allows a beginner to build up their skills and knowledge of swordsmanship as they follow along the text. That doesn’t mean I necessarily agree with the interpretation always (and I don’t think Christian Tobler does either nowadays), but the format and layout is still useful today. Terms  are introduced and explained, plays are interpreted and displayed- what more can a beginner want? though it is a pricey book and the interpretations can be queried in many places, this is still a recommended book. 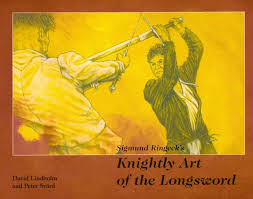 This was the second published interpretation of a German Longsword source. Unfortunately (perhaps), it’s a second published interpretation of the same German source as “Secrets”. This book is a hardback published in portrait orientation, and features a translation of Ringeck illustrated by a number of line drawings of two fighters. Alongside the translation and interpretation (covering only the longsword), there are a number of extra articles- an introduction by John Clements (and asides about edge versus flat), how to sharpen a sword, some comments on interpreting and training to use a sword.

So, is it any good? Well, it’s difficult for me to say. Since “Secrets” came out first, I found this to be fairly repetitive, though with some differences in interpretation- however, I might have a different interpretation. The line drawings can be both good and bad- the legs lack dynamicism in most images, and the fighters appear to be standing almost on top of each other in most cases. Some actions are definitely over-interpreted, with elements from other portions of the text brought in to try make an interpretation work. The lack of the wrestling and armoured combat also makes “Secrets” stand out more in comparison. Some decisions, like moving the “Vier Leger” section, I don’t agree with, and the training notes are pretty useless.

Basically, this book has never really been that useful for me. I don’t really recommend it unless you want another Ringeck translation for comparison, and I definitely don’t recommend it for a beginner today.