The Skirmish: a role for swords in battle

The Armoury > Articles > history > The Skirmish: a role for swords in battle 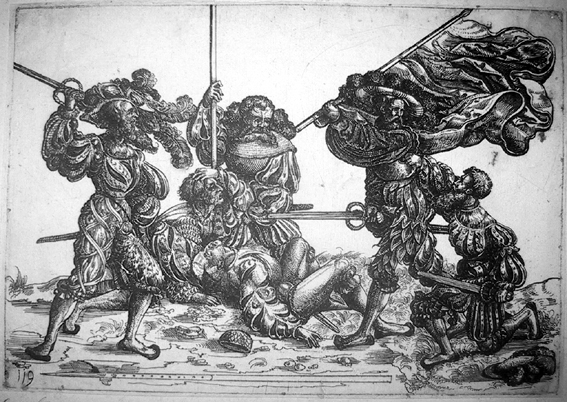 Skirmish (as defined by Google)

“there was a skirmish over the budget”

It’s one of those recurring questions: “Is this sword art useful in battle?” I’ve heard numerous times over the last time, as have many of us old HEMA hands; Matt Easton recently addressed the issue on his Youtube channel. The questioner often notes the emphasis on one-on-one fighting in the manuscripts, and compares this to the multiple opponents envisaged in battle, and concludes that sword arts “are not battle arts”. While there is some justification for this view, I feel many practitioners and historians do not actually understand what “war” and “battle” implied in the Medieval and Early Modern periods. A more nuanced view of warfare has plenty of space for individual and small group combat, and such combat was probably the dominant mode, as I shall argue.

Most people envisage war as a string of “battles”, large or small set-piece engagements. In truth, the set-piece battle was a rarity, and the majority of soldiers, in almost every time period, never even see the enemy. Warfare is conducted by march and countermarch, proactive and reactive movement, and sieges. In the pre-Modern era, bringing an enemy to battle was extremely difficult; famously Wellington evaded large French armies in the Peninsular wars for months, and similarly French armies evaded his armies during the final stages. When two armies are on foot or partially mounted, their manoeuver speed is limited. Battles only occur when both sides want them, or when one side is pinned by geography or politics. Marlborough’s march in the War of the Spanish Succession, and the German Blitzkrieg in WWII are examples of breaking such stalemates, but such is uncommon in warfare, and often not repeatable once an enemy knows how to counter such.

Thus, the “battle” is not the primary function of warfare, a fact military philosophers such as Sun Tzu and von Clausewitz have long known. Most soldiers simply move and camp, with long periods of boredom interspersed with drills and training. Such soldiers had very little need of martial training, since their roles involved either grunt work or drilled motions.

However, there are several roles in any army which always involve contact with the enemy, and these we need to focus on. Firstly, every army makes use of scouts, and secondly, almost every pre-Modern army made use of foragers, hunting for food and water for the army, often in the same land as the enemy’s own foragers. To these two common roles, one could add raiders, small groups of men who crossed deliberately into enemy lines for a variety of purposes.It is these far-flung elements of an army who regular came into contact with the enemy, and who, I argue, most likely made use of their martial skills during impromptu, chaotic contact with the enemy.

Here’s an example of such a skirmish, in the words of Johannes Renner, a chronicler of the Livonian War in the 16th century:

“Twenty-four landsknechts, most of whom had muskets, were on their way from Prussia to Riga, and had spent the night in the inn at Kaugern. The Russians attacked them, but they put a resolute defence, three times driving the Russians out of the courtyard and killing over one hundred of them. But then they were completely exhausted and the Russians had received reinforcements and set fire to the village. And so the landsknechts were forced out and then attacked from all sides.”

Other anecdotal accounts of skirmishes include Francisco’ s Fight, and almost every encounter between the French and English during the Hundred Years War, which was dominated by low level warfare. [Edit: Jack Gassman sent me this link to more accounts of such encounters.]

What do I mean “low level warfare”? Basically, continuous small scale encounters between small groups of men, generally on foot. For instance, the landsknechts of the 16th century were organised in files of 8 men, under the command of a doppelsöldner, and groups of 2-5 files were used as scouts and foragers. In Ireland, one galloglass worked with 6-10 kerns, and often a group of 2-3 galloglasses went raiding. Small troops of horsemen were also used, especially in the Medieval and Modern periods (logistics prevents most Early Modern/Renaissance armies from fielding too many horses). Encounters between such groups would have been brief, at close quarters, and often asymmetrical. Interestingly, and possibly telling, the earliest landsknecht regiments used men with arquebuses as doppelsöldner, but rapidly moved to requiring these men to be armed with halberds or large swords, implying they needed to be more involved in battle.

Thus, my brief argument here is that martial skills such as using a longsword are useful in warfare, just not necessarily directly in battle. Unfortunately, the emphasis on the study of set-piece battles in military history means we don’t have too much insight into the skirmishes that dominated warfare, but I’d argue that in these small-scale, sometimes even individual encounters, we’ll find the use for the sword in warfare.