Further thoughts on the Kron

The Armoury > Articles > longsword > Further thoughts on the Kron 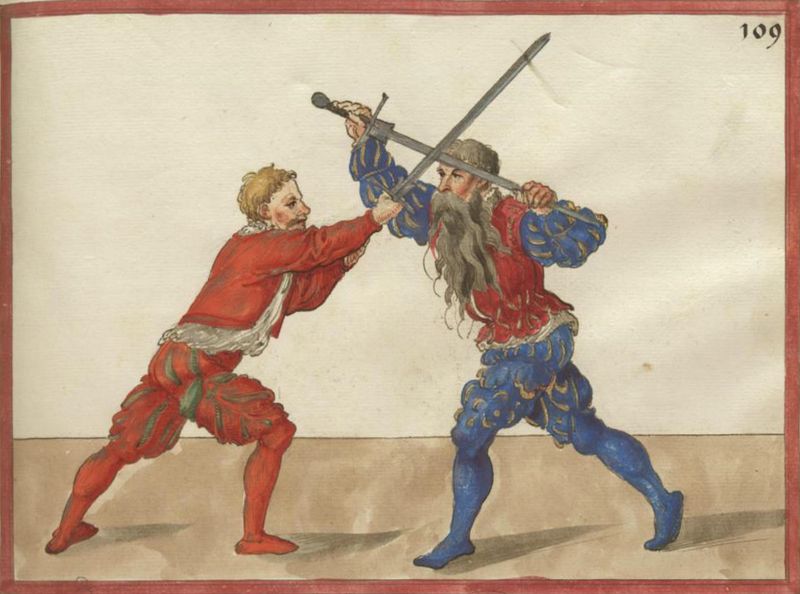 My article about the Kron, or Crown, guard a few months ago (read it here) caused quite a stir, with a lot of discussion about whether I was right about the Kron being a horizontal guard above the head, sometimes with the left hand gripping the blade. Since a lot of people seem to argue for a point up version of Kron, I’ve been looking for further references in the sources to the Kron, to try put the matter to rest. Today, I ran across a further set of references to Kron, in the new English translation of Hans Medel’s longsword book, available on Wiktenauer and featuring the translation skills of Christian Trosclair.

Medel’s book is quite interesting, as it is mainly built around the verses given in Ringeck, but two different glosses are often given, one by Master Hans (Medel) and the other from another source. This gives us two versions of the same play.

“Another play. how the crown breaks the scalper [schaitler]

What comes from him, the crown takes away.

Master Hans: This is when someone has thrown-in the point at you with the scalper as is first taught. So break the crown against it, because it breaks the scalper thusly:

If he also stands as such, then fall into the cut with your hilt over his blade or over the grip between both hands and move aside so he will be struck upon the head, etc. This is called the crown.

Others differ thusly:   When you cut-in above with the scalper, if he then parries high with the sword gripped with an armed hand or athwart over the head. That is called the crown against seydenfaden’s scalper and with that run-in with shoving, etc. It also takes away the scalper. It also breaks one as such again as above with the hilt thrown over that and cast down.

Figure 1: Cod.I.6.2º.5 31r. The verses for the first plays involving the Kron. I’m not totally sure how the image relates to the verses- it may relate to the previous play on the Schaitler.

Another play. How the slice breaks the crown.

Slice through the crown, so you break the hard beautifully. Press the strike. It moves-aside with slicing.

Master Hans:               This is when someone moves the scalper aside with the crown in the same way as above. So follow after him and move him so you slice him in the head, etc. Then you withdraw to the side.

Other differ thusly:     When he parries the scalper or otherwise a cut with the armed crown and with that runs-in, then take the slice under his hands, into his arms and press firmly upward and with the strike move yourself aside with it.”

In this set of verses, the Kron is fairly clearly defined:

The armoured or armed hand is a common term seen in Lecküchner’s messer treatise for a block in which the left hand grips the blade, clearly indicating a half-sword, point left guard above the head, an idea supported by Master Hans’s “between both hands”. Similarly, “athwart” indicates a point left horizontal guard above the head.

The follow-up to parrying the incoming cut with the Kron involves shoving the blade away or moving aside to strike to the head, consistent with other sources. More importantly, the counters to the Kron involve the same language as in other sources, most particularly the exhortation to “slice though” the Kron. Here it is fairly clear that the Kron is defeated by pulling the hilt down from the Kron and slicing into the opponent’s arms.