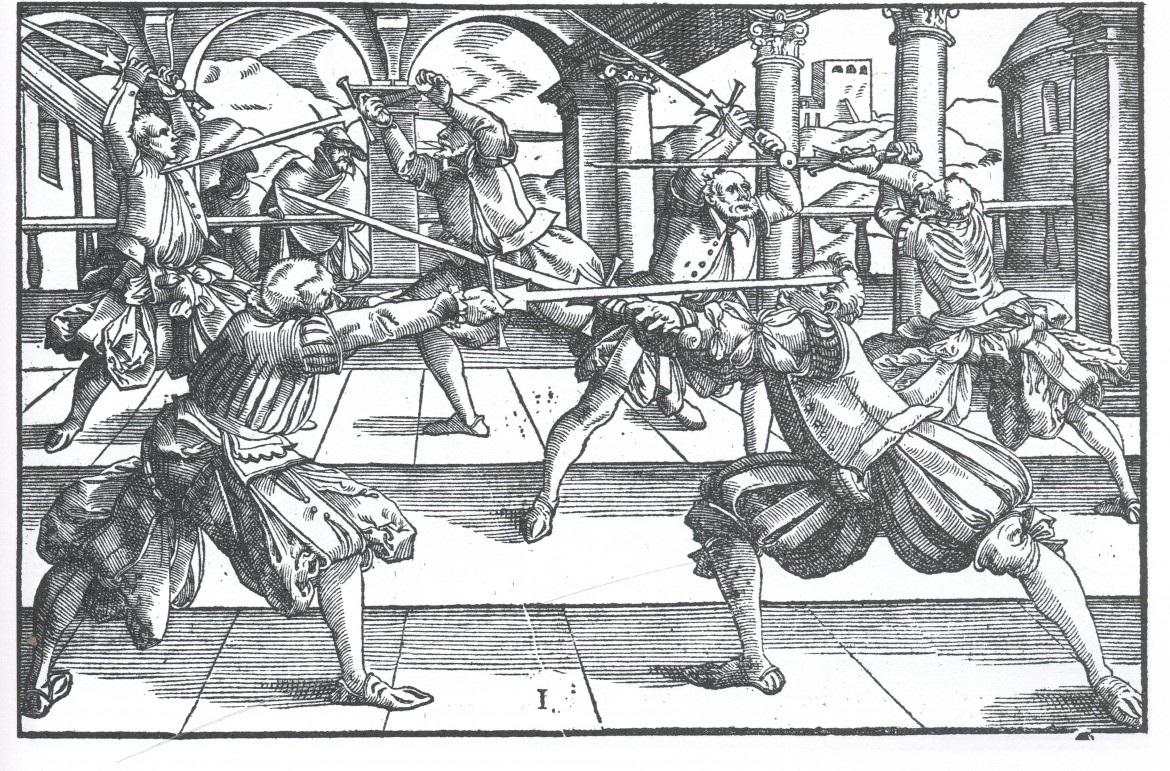 In previous installments of the Meyer Masterclass series, I’ve dealt with Meyer’s longsword devices in roughly the same sequence as he presents them. We dealt with the first three devices which lay the basis for parrying and counterattacking, the Fourth Device in which Meyer explains how to attack, and then three devices using a beat from the left. The next two articles, on the slice and on the upper hanging, follow on from the previous devices, but I’ll add some extra material from other parts of Meyer’s treatise to show more examples of the principles in play.

The Slice, or Schnitt, is a fundamental technique in the old German fighting arts, part of the triumvirate of attacking motions along with the Cut and the Thrust (Meyer replaces the Thrust with the Wind in the longsword). Basically, a Slice involves placing the blade against an opponent’s arm or body and applying pressure. With a sharp sword, a Slice will do exactly that- slice a chunk of flesh off the opponent as the sword is drawn. Many mentions of the Slice in the older Lichtenhauer treatises involve slices to the face and chest.

However, the primary purpose of the Slice is to control the opponent’s arms and blade. A Slice is done from an extended position such as Langenort (Longpoint), and is generally used when an opponent pulls away from the bind. Rather than pull back and parry, a relatively slow action, the sword can simply be turned and pressed against the opponent’s arms, which naturally become exposed as he pulls away. Slicing is intricately tied to another principle, that of “chasing after” or Nachreisen. In its simplest form, Chasing involves following after the opponent’s blade in exactly the same direction; if he pulls from his left to his right, your blade should move from his left to his right chasing the openings created by his movement. Thus, Slicing involves chasing his blade as it is pulled back, and pressing your sword onto his arm as it becomes exposed.

In the older tradition, the Slice would be used to cause physical harm while restricting the opponent’s movement. Meyer uses the Slice a little differently- he tells us to slice onto the opponent’s arms and then shove the opponent away, using the shove to create an opening into which he strikes. This is obviously an adaptation both to the blunt federschwert and the context in which Meyer uses the longsword, that of “play fencing” in the Fechtschule. However, the basic use of the Slice is identical to the older tradition.

Though Slicing is mentioned numerous times in and amongst the devices in Meyer’s Chapter 11, it is only directly detailed in two devices, and is present in two more where the motion is not named. These devices are:

In the first two devices, the Slice is directly named, but I’ve inferred its presence in the 3rd and 4th devices listed. Figure 1 is a flowchart for these four devices, showing the similarities (and a few differences). Figure 1: Flowchart of four devices with the slice

What is the slice position? The first two devices simply say “slice on to his arms”. The next two detail a position where the blade is underneath the opponent’s arms, as shown ‘in the small scene on the right in Image I” (wording from 1.38). 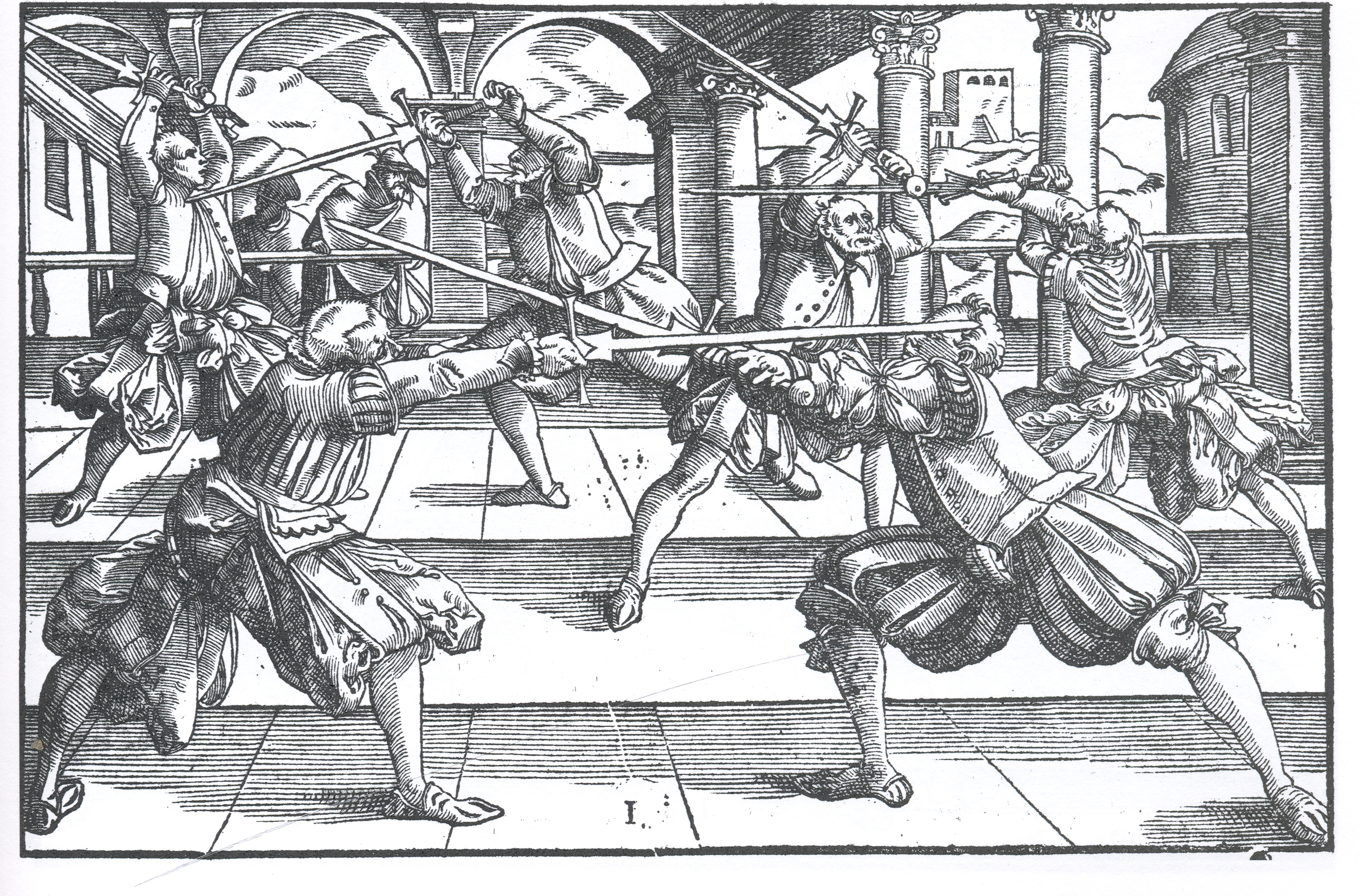 Figure 2: Meyer’s Image I. The pair of figures on the right show the Slice from below.

It is likely that the Slice position in each of the four devices is the same as in Image I, since the starting position is very similar. This would be an “unterschnitt” or “Low Slice”, which Meyer refers in his later commentaries as “the true Ancient Slice”, which “requires a master to execute” (1.59R).  The Slice from above, the opposite move to the Low Slice customarily done from the right, is not detailed in any of the devices, but is discussed briefly in the later commentaries.

So, what happens after the slice? Though Meyer’s device from Vom Tag is not terribly informative, just saying “etc.”, the other three devices use similar wording. Once you have caught and arrested his motion with the slice, you shove him away with a jerk using your shield or forte/strong, and cut at him as he falls away. The device from Eynhorn adds a little more detail, telling you to shove him towards your left. The wording in all three cases implies a strong shove followed by a cut to the nearest opening.

Three of the devices finish at this point, but the device from Zornhut adds a third part to the play, which can be used for all four devices if needed. If you slice onto your opponent’s arms and shove him away, he could recover quickly and strike in at you. In this case, slice onto his blade, and when he pulls away to cut again, slice back onto his arms again.

Meyer’s devices clearly contain four instances of slicing as I’ve detailed. This is an important technique for controlling the opponent in the bind, and a counter-technique to winding and the cut (the so-called “Krieg” or War). It’s slightly strange that all four devices detail only the Low Slice, or Slice from below, but there is no mention of a Slice from above in a device. Meyer obviously considers the Slice from above either self-evident (it’s definitely detailed in the dussack and rappier sections) or ineffective with the longsword.

In our own sparring we have found slicing to be a very effective technique, but one that does need a lot of practice. Since slicing is done from an extended position in the bind, it is done close to the opponent and must be done fast and accurately. Our experience shows that the shove must come immediately after the Slice (no wrestling on the sword!), and can be done to either direction or straight back. We don’t always manage to slice onto both arms, but sometimes only catch one arm, but that is normally sufficient to control and displace the opponent’s cut.

Slicing is an overlooked technique in many ways, as it isn’t as sexy as a thrust or a cut, or as fancy as the winding. However, it should be part of every longsword repertoire, and we should see it used more often, as it is an ideal technique for keeping yourself safe while in the bind.