Thoughts on the use of true two-handed swords 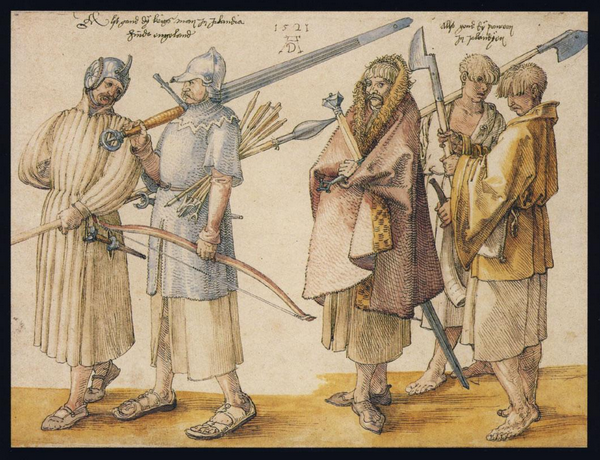 I’ve always been fascinated by the true two-handed sword, the enormous Schlachterschwert used by the Landsknechts in the 16th century, but it remains a puzzling weapon within the HEMA context. Since there are no texts in the German tradition dealing directly with the use of these enormous swords, addressing their use and place in battle is an exercise in speculation rather than interpretation. Last year I had a chance to handle a few historical examples of these swords at the Timberley Collection in York, and I promised to write up my observations. However, I thought it best to preface my observations with some general historical comments, trying to place my thoughts in context. I’ve tried to stick to accessible web resources for references, but there is a longer bibliography is provided at the end for further reading.

The true two handed sword is primarily connected with the Italian wars and the Swiss Confederates and German Landsknechts who waged these wars. However, large two-handed swords also appear in two other 16th century infantry traditions, the Gaelic gallowglasses and the Japanese foot samurai of the Sengoku Jidai period, the consideration of which allows some cross-correlations to be made as to their use.  These three traditions can be summarised as follows: 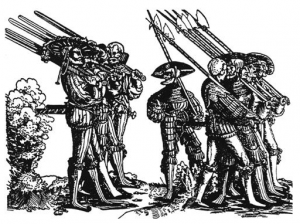 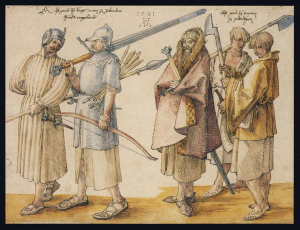 Dürer’s image of the Irish gallowglasses and kerns. Note the hollow pommel on the sword. 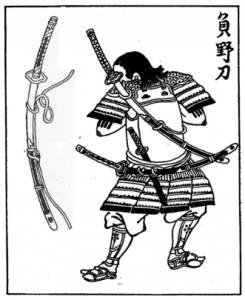 Samurai with ōdachi slung over back

These three very different traditions share many common features which are of use in reconstructing the battlefield roles of large two-handed swords and the use of such weapons. Though some of the following comparisons are a bit strained, they do serve to show a common thread. Firstly, the soldiers using these weapons are always elite soldiers, set apart from the normal soldiers. The döppelsoldner in the Landsknecht army was expected to bring his own armour (generally a cuirass and helm, but often more), and to be trained in using his weapons. Similarly, a gallowglass fought in a mail shirt and helm, and came from a fighting tradition of displaced Scottish nobles. A foot samurai came with his own armour and weapons, and, though generally poor, was trained in the use of weapons from childhood.

Secondly, these warriors served in similar battlefield roles. In Ireland and Europe, the wielders of halberds and two-handed swords formed the first rank of infantry, the skirmishers ahead of the main infantry block, and as the bodyguards for the general and flag party. Descriptions of gallowglasses taking out horses with their swords are preserved in some old Gaelic records, skirmishing ahead of the line. In the Japanese and gallowglass traditions, the warriors were described as using the giant sword to fight off large groups and dominate ground, and similar stories are told of Frisian folk hero Pier Gerlofs Donia and Georg von Frundsberg. It does, however, appear to be a myth that two-handed swords were used to cut the heads off pikes (probably impossible anyway considering the langets protecting the pike staves), quite possibly a misinterpretation of a battlefield description.

Thirdly, in all three traditions, the use of the two-handed sword ceased by the early 17th century. In Japan, the Tokugawa shogunate banned swords greater than a certain length after 1603. In Europe and Ireland, the true two-handed sword faded away more slowly, but was a rare sight in the 17th century. Oddly enough, the two manuals we know of dealing extensively with large two handed swords, Figueyredo’s  manual on the Portuguese montante (1651) and Alfieri’s work on the spadone (1653), were published mid-17th century. Though the Japanese demise is bureaucratic, it is likely that changes in warfare and the increased presence of firearms ended the use of such weapons on the battlefield. Thus, any consideration of the two-handed use should bear in mind that it had a specific battlefield role in which it excelled.

Part 2: Observations on the handling of two-handed swords

I’ve been fortunate enough to handle several real two-handed swords and to observe many, many more in the last two years, so I’ll present my observations on the handling and morphology of German two-handed swords.  I’ve thrown in a couple of other sword observations as well (just because). Unfortunately, there are very few pictures here, as most of these collections restrict taking photos.

Swords from the Timperley Collection, York

Last year at Fechtschule York, Payson Muller organised a handling session at the York Museum for the lucky hordes. The collection we handled was part of the Timperley Collection, a bequest from the first half of the 20th century. Two large two handers were available for handling, one large Bidenhander with a wavy blade, and a large but fairly standard sword. Though

This sword was completely forward-weighted, basically good only for big downwards blows. This could be because the original pommel had been replaced, but this was uncertain. It was significantly more useful when the ricasso was gripped.

The second sword (which is unfortunately not imaged on the collection website) was a large, straight bladed weapon with a spatulate tip and straight quillions, a little shorter than the first sword. This weapon was heavy but manageable- I would not want to swing it for long, but I could swing and fight with it.

Bonus sword: short sidesword, very similar to Meyer’s weapon, including a projecting shield on the crossguard. Almost exactly the same weight, balance and size as my Regenyei 36” sidesword.

The day after the Smallsword Symposium, Phil Crawley organised a trip to the warehouses of the Glasgow Museum. While the rest of the crew was oohing and aahing over smallswords (and some sabres and rapiers), I took the chance to handle two large two-handers. Thanks to Ralph Moffat for letting me handle the swords!

Compared to replicas, this sword was fantastically mobile. Bit larger than some replicas, the sword was mobile and felt quite light in the hand. A thinner grip than on many replicas.

Large longsword- this sword, probably of Highland extraction, unfortunately not shown. Though not a true two-hander, this sword was as large as the claymore, and as mobile.

From a very small sample, I can state that 3 of the 4 large two-handers I’ve handled are mobile and well-suited to a role in open space and skirmishes. However, the only true bidenhander in the collection was extremely forward-weighted, suited primarily for overhead swings when wielded as a sword.

Preserved armouries are an ideal place to view large two-handed swords and to seem them in context. Though there are many such armouries which I have not visited, here are my records from two such armouries I have visited (both of which are not well-known enough).

Coburg Veste: The castle of Coburg Veste in southern Germany hosts an enormous collection of arms. While the tournament armour will interest those who enjoy mounted combat, the prize for me was the armoury in the roof, containing several hundred suits of “black and white” armour, along with pikes, halberds, sideswords, guns and the two handed swords.

Emden Armoury: The Rathaus in the small town of Emden in Germany contains an enviable collection of late 16th century arms and armour, perfectly preserving a collection bought in a relatively short 30 year period (1550-1580). One wall is covered in large bidenhanders, many of which are identical down to the numbers stamped on the blade (common in other armouries).

Observations: These armouries carry relatively large numbers of bidenhanders, essentially for the defense of fortifications. Many of the swords are identical, bought in lots. This is again strong support for the idea that these swords are standard and not ceremonial items. The swords are often fairly roughly made, but generally feature exaggerated quillions and often a spatulate tip.

So far, I’ve stuck to documented evidence (even if some of it is almost folklore). From this, we can start to speculate about the use of such swords in battle, though this much necessarily be treated as opinion.

Delbruck, Hans. “History of the Art of War within the Framework of Political History: Antiquity (Contributions in Military Studies) 4 vols, translated by Walter J. Renfroe Jr., vol 2, Warfare in Antiquity.” (1975).

Oman, Charles. A History of the Art of War in the Sixteenth Century. Greenhill Books, 1999.