Meyer Masterclass: Three devices with a beat from the left 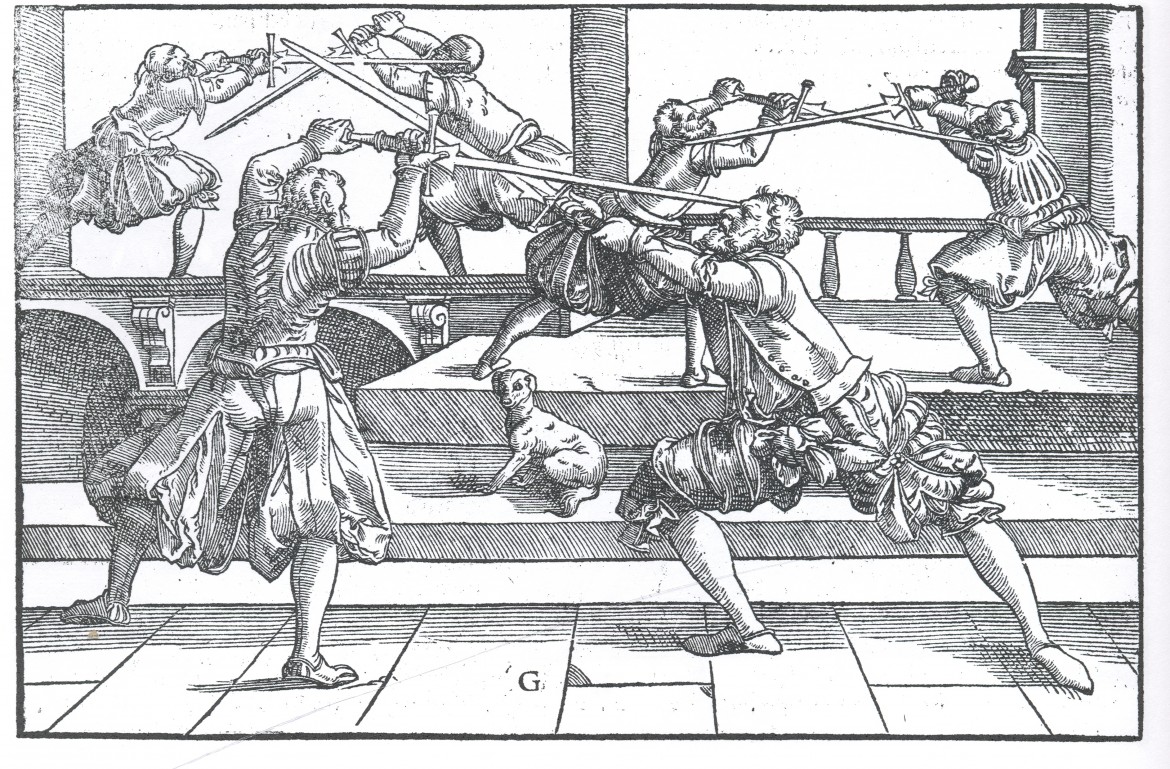 The devices in Meyer’s longsword introduce different techniques sequentially to the student,and often introduce the same technique in a variety of contexts. One such technique is a beat with crossed hands from the left, which is introduced and displayed in three consecutive devices in Meyer’s section on Vom Tag. These three devices are the “Fourth Device”, “Another” and “A counter against Vom Tag”, which are discussed below.

Originally I considered these three devices as separate entities, but I now consider them to show the same technique in three different contexts. The “Fourth Device” and “Another” are both attacking sequences, whereas “A counter” is a defensive sequence. The “Fourth Device” lays on with a feinted thrust and a Zwerchhau, and continues on with a long sequence of attacks (as discussed here), whereas “Another” uses a sequence of three cuts to lay on. However, all three highlight the same blow to the opponent’s blade from left to right with the flat or short edge, using the momentum of the blow to pull your blade around to strike the opponent’s right side. I now believe that “Another” refers to another use of this beat, rather than to “another” attack. I’ve displayed the similarities of these three devices in Figure 1. Figure 1: Comparison of the three devices using the beat from the left

A lot of readers must be wondering why I’m using the word “beat” for a blow with crossed hands from left to right, when the word “Krumphau” immediately springs to mind. The Krumphau or “crooked strike” is defined by Meyer to be any strike with crossed hands, and thus the strike used in all three devices is clearly a Krumphau. However, since Meyer also notes that the Krumphau can be used for difference purposes (such as striking to the opponent’s head, as in a later device from  Nebenhut), I prefer to use the word “beat” when discussing the use of the Krumphau in these three devices. In each case, the opponent’s weapon is struck strongly with the flat (or with the short in “Another”), blasting the weapon out of the way and clearing the path for a follow-up strike to the opponent’s right using the weapon’s momentum.

A couple of notes:

1) In the “Fourth Device” and “A counter”, the blade is gathered to the left with crossed hands. This allows the hips to be used to drive the blow powerfully from below at the opponent’s sword. Try doing this blow with a lot of hip drive.

2) In “Another”, the blade is pulled back from an attack, pommel to the left, and then leverage on the pommel is used to propel the blade around for the beat. Meyer says to strike up from your left, but I find half the time I strike horizontally or downwards, depending on where the opponent’s blade is.

3) In “Another”, Meyer says you strike at the opponent’s blade not matter whether he is attacking you or not. This is a classic taking- you have pulled his blade forward by forcing him to defend against an attack, enabling you to strike his blade out.

4) Three different finishes are mentioned in the three devices, but all are to the opponent’s right: a long edge Zwerch from your left, a short edge cut from above, and a cut from below. This fits with Meyer’s statement that different lines of attack can be used in different situations, depending on where the opponent’s blade is.

Hope this short post shows clearly how the beat from the left can be set up and used, and how the three devices use the same technique in slightly different ways.