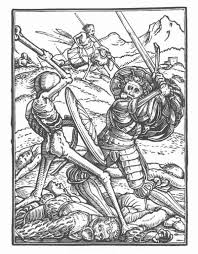 My previous article, “Some observations on women, tournaments and heavy-hitting” cause quite a stir a few months back. While lots of people liked my comments, some argued that what they did was not “heavy hitting”, and some argued that such hitting was essential to HEMA. Now I’m finished with a hectic September, I’d like to address some of these criticisms.

Firstly, I think I need to define what I mean by “heavy hitting”. For me, heavy hitting meets one of the following definitions:

– Hitting an opponent hard enough to cause injury, WHETHER OR NOT the opponent is wearing protective gear

– Hitting an unprotected/open opponent as hard as possible

– Striking without control or care for the opponent’s safety

Now, people who do hit overly hard often justify their actions with one of the following five arguments:

Some people argue that they can hit hard because the other person is wearing protection. This is, to my mind, an incredibly silly argument. What if the protection fails? What if the protection falls off just before impact? And why do you hit an armoured target harder than an unarmoured target if we are practicing UNARMOURED sword combat? The arts we study were trained, in the main, without any body or head protection. The people we are emulating and whose manuals we use did not have the protection we use. When they did put on protection, they were practicing ARMOURED fighting.  If we are relying on the other person’s protection to keep him safe, we are relinquishing our responsibility of our partner’s safety (and yes, even a tournament opponent is a partner in our activities). Armour isn’t perfect, and neither are our tools- a broken sword blade is a danger, and hitting overly hard greatly increases the chance of harm.

2) The techniques only work when I hit hard

Some people have argued that the techniques they use only work if they put a lot of power into the motion. They argue they must hit hard in order to be successful. This is obviously fallacious, not to mention discriminatory, as the corollary of the argument is that only big, powerful men can use such techniques. It’s quite true that some techniques work best with speed, but that doesn’t mean relinquishing control. If you can only do a technique so hard you cannot control your strike, you pose a risk to your opponent’s health. It probably also means you aren’t doing the technique in a mechanically sound way, or you are forced to resort to brute strength when you don’t get the timing right.

3) The manuals tell me to hit hard

Historically, we know that some techniques were used in tournaments and some techniques were not, being reserved for a duel to the death. We also know that a fighter was fined, and heavily so, if he damaged his opponent in a tournament. And yet, some people claim that manuals encourage them to brutalise the opponent. The Lichtenhauer verses are often used for this purpose:

“With the entire body fence
Whatever you desire to execute strongly”

“Item. You shall note that everything which you wish to fence, execute it with the entire strength of the body; and with that, cleave-in to the head and to the body, nearing him, so he may not change-through in front of your point; and with that cut, in the binding of the swords you shall not omit the harassing-strikes to the nearest opening (which will be delineated hereafter in the five cuts and in other plays)”

However, this is cherry-picking your line, often without context. Does it say hit hard, or use your whole body for the strike? The gloss implies that you need to present a real threat to prevent the opponent changing through, rather than hitting the opponent as hard as possible.

No historical martial arts instructor could have let his students spar without control- he’d have no students left soon! Control is emphasised time and time again in the sources- I personally like the following lines from the Ms. 3227a (Döbringer):

…I will give you the third advice /
you should not learn fencing
To overpower someone with your art /
for unjust reasons
furthermore you should not /
fence with a pious man /
except there is real need.
If this happens and
no man attacks for no reason /
If you wish to succeed
In all fencing, I advise /
really do not rely too much upon your art
And have the highest righteous fencer / in your minds eye
So that he may protect you in your art
And practice your art for emergencies / in the right way
And not for nothing or out of foolishness
So you may succeed always /
because a fencer / is a good and righteous man.

– Christian Trosclair’s translation of Ms. 3227a

I somehow see the author of Ms. 3227a frowning on some of the behaviour we see in some modern tournaments!

I’ve heard this argument from some experienced instructors who probably should know better.  Basically, they argue because they’ve been training and optimising their body mechanics, they hit harder. Which is true- I can also generate a lot of power because I’ve been doing this a long time. However, what is also true is that because I have better body mechanics, I can control my blows more too. If you have better body mechanics, you can throw the same strike with less power, and you should be able to stop the blow perfectly. Just because you’ve been doing this for a while and move well, doesn’t give you carte blanche to put your opponent’s safety at risk!

To abuse an over-used phrase, “With great power comes great responsibility”. Just because we can hit harder, doesn’t mean we should. We’re not in a duel for our lives, and those of us who are more skilled should be an example to the less experienced.

This is pure bullying- noticing a flaw in an opponent’s technique, and using heavy hitting to expose that opponent to a greater risk of injury. Yes, so his block isn’t perfect. Yes, use this weakness to expose him. No, don’t do it so hard he is injured, or worse- he packs up and leaves, believing HEMA to be nothing more than a bullies’ sport.

I’m not going to ignore an opponent’s weakness, but there are other methods of exposing a poor block than bulling through. If the only option you have is to try and break his guard with force, you need to work harder and learn a wider range of techniques.

A lot of people also seem to believe they are immune to prosecution for their actions in sparring and tournaments. No, you are not- if you injure someone through your wilfully negligent actions, you can be accused of assault. Even if the other person is armoured and willingly steps into the ring, you still have a duty to protect him from undue harm. Though accidents do happen, hitting hard enough to bend masks and break blades definitely doesn’t qualify as protecting your opponent!

Basically, sparring of any sort, including tournament sparring, is a form of social contract, in which we need to pay attention to our partner’s safety. As I’ve said before, I’ve taken part in tournaments with heavy hitters and probably will again. However, HEMA is going nowhere fast if we don’t start considering our partner’s safety and the way we fight more seriously.

A couple of people asked for some reading on historical rules: